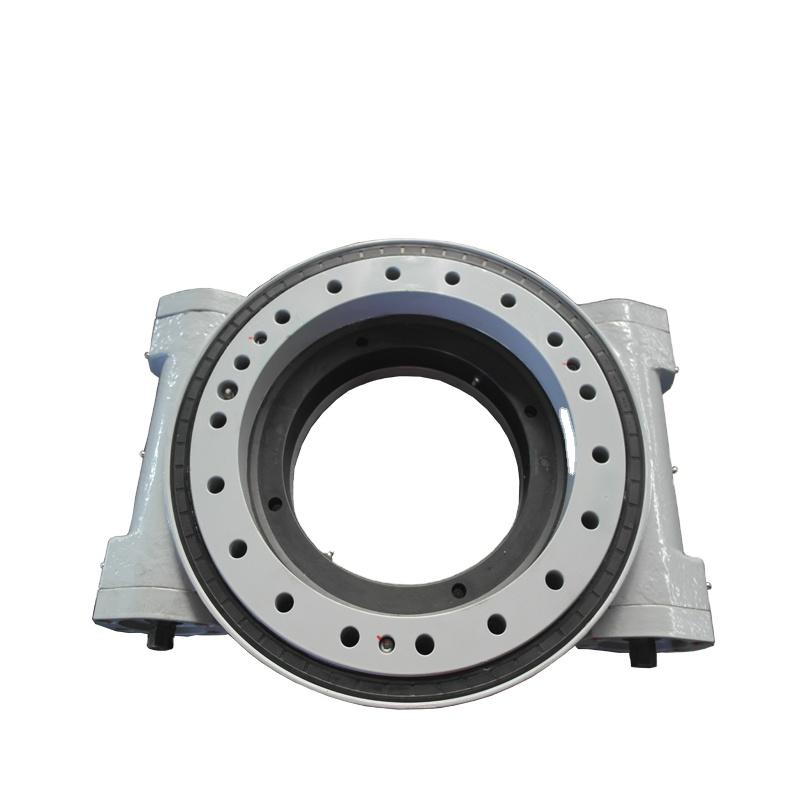 The dual-worm slewing drive achieves the goal of linear contact between the rolling elements and the raceway by setting the double row raceway and the double row cylindrical roller. And the raceway has a certain inclination angle, thereby increasing the load carrying capacity, so that the bearing can support axial and radial loads, as well as large overturning moments. Because the outer teeth are set in the middle of the height of the outer circle of the inner ring, the worm gear can be installed on the outer circle of the inner ring, which is comparable to the existing double row four with outer teeth. Compared with the point contact ball slewing bearing, it can greatly improve the load carrying capacity, and increase the rigidity and the overturning moment bearing capacity under the same space conditions. It has the characteristics of simple structure, space saving, easy use, and cost reduction. 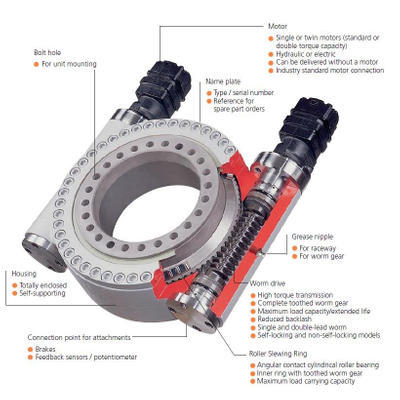 The inner ring is fixed above the seat ring of the base, and the first shaft shell and the second shaft shell are symmetrically arranged on the outer side of the seat ring of the base. The axis lines are perpendicular to each other in space; the first worm is installed in the first shaft housing; the second worm is installed in the second shaft housing. The first worm and the second worm are both meshed with the outer gear ring. In this device, two worms are used to drive the outer ring gear of the slewing ring. The translational forces of the two worms offset each other. At the same time, the gap between the worm and the outer ring gear can be "eliminated" to achieve precise positioning of the rotation angle of the outer ring gear. The dual-worm slewing drive has simple structure and reasonable design, and can be widely used in engineering machinery, construction machinery, solar photovoltaic and other industries.

Our company has launched these models of dual-worm slewing drive(https://www.slew-bearing.com/Dual-Worm-Slewing-Drive-For-Solar-Tracker-pd41486784.html): SE17-2, SE21-2, WEA17-2, WEA21-2, and more models are still under development.