You are here: Home » News » Slewing Rings » How to replace and install slewing bearing for excavator?

How to replace and install slewing bearing for excavator? 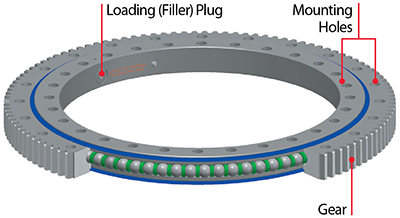 Move the excavator to a flat place. For the convenience of assembly and disassembly, special tools such as small wind cannons can be used. The rear arm must be extended first, and then tied to the rear weight with a rope and an upper lifting hole to prevent the rear arm from falling.

The driver's seat is completely disassembled by using the base. The disassembly can see the intermediate rotary joint. Separate the three oil pipelines on the top, pump one, and move four forward and backward. The slewing bearing butter tube can be arranged in series with thin iron wires, and then the slewing motor can be loosened and extended, which can turn the entire excavator.

Removed the upper part and can see all the slewing bearings. Check to see if there have broken a lot of teeth. Generally, you will hear a sound when the teeth are broken, or you can't move when you return to a certain position. If you find that this situation requires a break, do not force the construction of the project. The inner ring is fixed and the screws are removed, and the slewing bearing,  is moved aside. When the scrap metal is resolved, the value is carried out. Then the butter was tidy, then cleaned with gasoline, and the iron pin was cleaned. 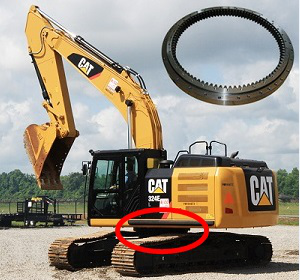 Install the slewing bearing to tighten the screws. The screws need to be removed and replaced again to prevent dark injuries and rupture. Due to small losses, the screws need to be of high toughness. Generally, the national standard 12.9 is used. Each screw needs to be tightened with a KG wrench. , More than unified work pressure. Tighten the screws of the inner ring, wipe the butter on the shelf, and spread each tooth evenly. After wiping it, point it back to the upper part of the original fork, and point it to the positioning pin of the service platform and the slewing bearings,