You are here: Home » News » Industry news » The reason for the damage of the slewing bearing and how to deal with it?

The reason for the damage of the slewing bearing and how to deal with it?

The reason for the damage of the slewing bearing and how to deal with it?

1. Damage to the slewing ring bearing

In various construction machinery such as truck cranes and excavators, the slewing ring bearing is an important component that transmits the axial load, radial load and tipping moment between the turntable and the chassis.

In light load conditions, it can work normally and rotate freely. However, under heavy load, especially at the maximum lifting capacity and maximum amplitude, the heavy object is difficult to rotate, or even unable to rotate at all, resulting in jamming. At this time, methods such as reducing the amplitude, adjusting the outriggers or moving the position of the chassis are usually adopted to tilt the body to help realize the slewing movement of the heavy object and complete the scheduled lifting and other operations. Therefore, in the maintenance work, it is often found that the slewing ring bearing raceway has been seriously damaged. The two sides of the inner race and the lower raceway in front of the work area have annular cracks along the raceway direction, which causes the upper raceway of the raceway to be compressed in the most stressed area , and produce radial cracks in the entire depression area.

2.Discussion on the causes of slewing bearing damage

(1)The influence of safety factor . The slewing ring bearing often runs under low-speed and large-load conditions, and its carrying capacity can generally be expressed by static capacity, and the rated static capacity is recorded as C0 a. The combination of external load is generally expressed by equivalent load Cd. The ratio of the static capacity to the equivalent load is called the safety factor, which is recorded as fs, which is the main basis for the design and selection of the slewing bearing(https://www.slew-bearing.com/slection-of-bearing.html). 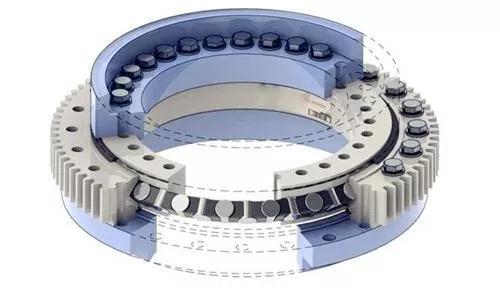 (2) The influence of the structural stiffness of the turntable

The slewing bearing is an important component that transmits various loads between the turntable and the chassis. Its rigidity is not large, and it mainly depends on the structural rigidity of the chassis and the turntable supporting it. Theoretically, the ideal structure of the turntable is a cylindrical shape with large rigidity, so that the load on the turntable can be evenly distributed, but it is impossible to achieve it due to the height of the whole machine. The results of finite element analysis on the turntable show that the bottom plate connected to the turntable and the slewing ring bearing deforms greatly, and it is more serious under large eccentric load conditions, which causes the load to be concentrated on a small part of the rollers, thereby increasing the size of the single roller. The most serious thing is that the deformation of the turntable structure will change the contact condition between the roller and the raceway, greatly reducing the contact length and leading to a substantial increase in contact stress. At present, the widely used calculation methods of contact stress and static capacity are based on the premise that the slewing bearing is uniformly stressed and the effective contact length of the roller is 80% of the roller length. Obviously, this premise is not in line with the actual situation. This is another reason that causes the slewing ring bearing to be easily damaged. 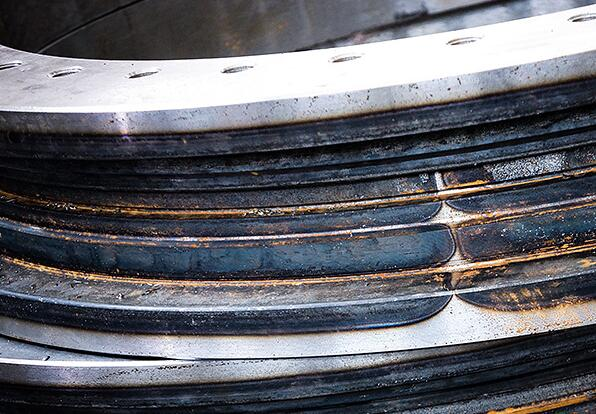 (3) The influence of heat treatment state

The processing quality of the slewing bearing itself is greatly affected by the manufacturing accuracy, the axial clearance and the heat treatment state. The factor that is easy to ignore here is the effect of the heat treatment state. Obviously, in order to prevent cracks and depressions on the raceway surface, in addition to sufficient hardness, the raceway surface must also have sufficient hardened layer depth and core hardness. Therefore, the depth of the hardened layer on the surface of the slewing bearing raceway is insufficient, and the hardness of the core is low, which is also one of the reasons for its damage.

(1) Through finite element analysis, appropriately increase the thickness of the plate at the connecting part of the turntable and the slewing bearing to improve the structural rigidity of the turntable.

(3) Improve the manufacturing accuracy of the slewing bearing, and focus on the heat treatment process. It can reduce the intermediate frequency quenching speed, strive to obtain a larger surface hardness and hardening depth, and prevent quenching cracks on the surface of the raceway.

The above is edited by XUZHOU WANDA SLEWING BEARING CO.,LTD, if you have further more question, just feel free to contact us!