You are here: Home » News » Industry news » How to prevent the failure of your slewing bearing?

How to prevent the failure of your slewing bearing?

Here are the main points of the article:

1. Seven steps to prevent the failure of your slewing bearing 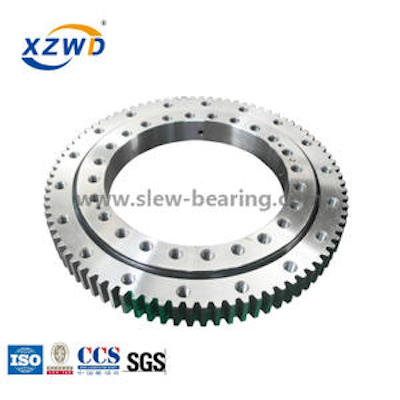 More than 96% of slewing ring failure could be avoided by following simple maintenance tips.

(1) Grease regularly:Apply a liberal shot of extreme-pressure grease to the fittings around the slewing bearing's circumference at intervals recommended in the operator's manual.

(3) Inspect the grease:Rub some of the purged grease between your thumb and forefinger. If you see or feel grit or metal chips in it, there may be a slewing bearing problem.

(4) Honor load charts:Even slight overloads can dimple the slewing bearing race. One 1/1000 of an inch depression will worsen with subsequent loads and cause eventual failure.

(5) Avoid repetitive, heavy loads:Lifting with the boom and undercarriage in the same position, such as repetitive curbside digging with an excavator, can put a dimple in the slewing bearing race close to the uneven load. If possible, change the angle of approach from job to job.

(6) Predict failure and repair the slewing bearing:If the turning torque of the slewing bearing increases substantially, or if you notice a clicking or grinding noise when rotating the structure, grease the unit and have some of the purged lubricant analyzed for wear metals.

(7) Play or clearance in the slewing bearing can indicate a problem and will show up as a lack of 'stiffness' in the extended boom. Free play magnified over the length of the boom allows it to rock back and forth under load. Check slewing bearing clearance with a dial indicator that measures how much the structure tilts when the boom is loaded.

2. How to maintain the slewing bearing

(1) The center of the slewing bearing remains open to allow passage of various hydraulic and control components.Since the slewing bearing is so critical, careful maintenance is necessary. More than 96% of slewing bearing failures are due to surface-originated lubrication problems, contamination, overloading, and improper installation and mounting fits.  These surface failures occur much earlier than classical fatigue failures and are less predictable.

(2) Inadequate lubrication is the most common cause of premature slewing bearing failures. In slewing bearings, a heavy-duty, extreme pressure grease is required. When lubrication is inadequate, surface damage in the form of roughening or waviness occurs. Later, fine cracks develop, followed by flaking. Failures due to contamination are fairly common. Dirt or other debris within the lubrication system act as an abrasive and accelerate the wear. Usually the slewing bearing raceways are scratched or indented, again leading to fine cracking and, ultimately, spalling.

(3) The unique design of slewing bearings allows for combination loads to be handled quite efficiently. However, whenever a load is applied that exceeds the slewing bearing capacity, permanent deformation could occur, again leading to a premature failure.

(4) Safety is the primary concern in detecting slewing bearing problems. Excessive bearing clearance due to accelerated wear results in less overall stiffness in the entire system. This lack of stiffness is magnified tremendously at the bucket, causing a potential problem for the operator. Another safety concern relates to uneven work distribution.This is especially common among excavators where most of the work is done in the same general area.这Poor work distribution leads to an uneven wear pattern usually causing excessive play.The potential costs associated with a worn slewing bearing can be significant if the problem is not detected in a timely manner. A severely worn slewing bearing can damage other components, such as the drive pinion and gear box. While maintenance is critical to lengthening the life of large slewing bearings, the severity of use of heavy equipment means that eventually, any large slewing bearing will become worn.