The current single volleyball slewing ring has two industry standards JJ36.1-91《Slewing bearing for construction machinery》and JB/T2300-99《slewing bearing》.That is, it was revised based on the previous Ministry of Construction standard JJ36-86 and the mechanical department standard JB2300-84.In the JJ36.1 basic parameter series table, 145 kinds of single volleyball slewing bearings with 145 basic parameters are listed,in JB/T2300 listed 120 basic parameters with 220 types of single volleyball slewing bearings .At present, in addition to the introduction of the main engine in China, most of the main engines are selected according to the parameters stipulated by the current two standards.Since JB2300-84 is implemented earlier than JJ36-86, its coverage is slightly larger than JJ36-86,Both standards contribute to standardized production of slewing bearings.With the rapid development of the unemployed and slewing industries of various mainframes, the introduction of foreign models, the problems in the standards have also emerged, and even hindered the development of the mainframe industry and the slewing bearing industry, which should be highly valued. 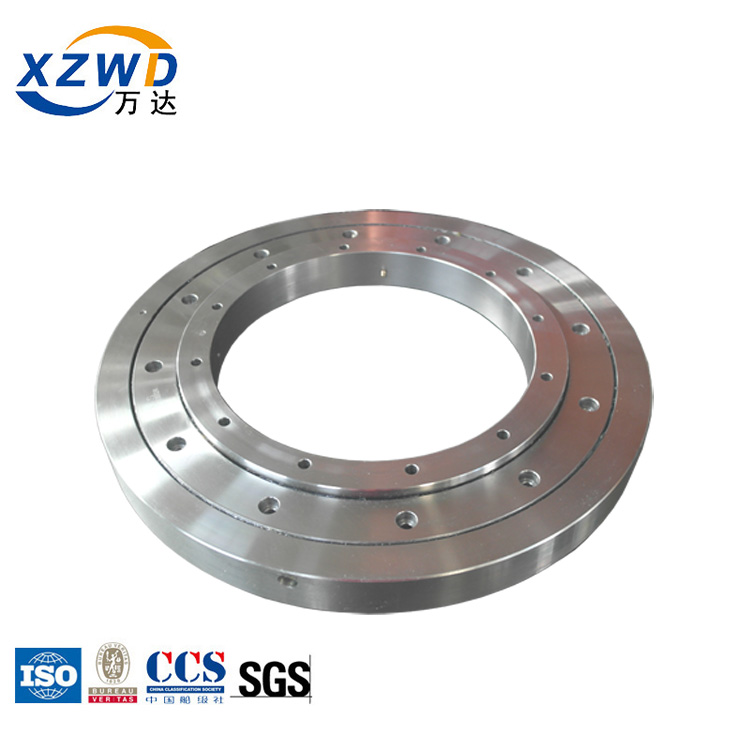 The center diameter (D0) of the raceway and the diameter of the ball (d0) of the single volleyball slewing bearing are its two main parameters,They not only determine the bearing capacity and service life of the slewing bearing, but also the basis for the design of other parameters. Therefore, the reasonable matching between the two is not only a reflection of the design level of the slewing bearing, but also directly affects the scientific, economic and structural selection of the host and rationality.Usually we use the ratio of D0/d0 to analyze the rationality of the main parameter matching,In the range of D0=500~2500, D0/d0=31.25~41.67 in JJ36.1; D0/d0=16.67~62.5 in JB/T2300.Germany ROTHEERDE company standard series single volleyball slewing bearing D0 / d0 = 30 ~ 56. So what is the ratio of scientific and reasonable? It is not difficult to find the answer by calculation and comparison. JB/T2300-99 is also aware of this problem in the revision. In addition to the original model of JB2300-84, each specification has added a steel ball with a small diameter and a total of 20 matching 100 models have been added. For example, a 30.900 is added on the basis of 40·900. The parameters are identical except for the diameter of the steel ball,But unfortunately, when D0≥1600, Adding 10 kinds of matching to a total of 50 specifications but deviating from the reasonable matching range. The new 100 models have no use value, whether the matching is reasonable or the deviation is reasonable. It is because each specification only reduces the steel ball by one gear based on the original specifications, while the external dimensions remain unchanged. In addition to reducing the dynamic and static capabilities, the production cost is reduced less, and the sales price of the two is lower. There are very few differences, why do users accept such "new things"?JB2300-84 in all specifications of D0 ≤ 1250, D0 / d0 values are too small, in other words, the steel ball is too large, the concept of bearing bearing, we can call it heavy slewing bearing, and for general engineering buildings Machinery is not necessary.Taking the 20 t class excavator as an example, most of the domestically used slewing bearings are 40·1120, the diameter of the steel ball is 40, and the diameters of the slewing bearing steel balls of the 20t class excavators produced by the imported and domestic (independent) enterprises are Within Ф28.575, the diameter of the center of the raceway is in the range of 1073 to 1212.The direct result of this is that the larger the diameter of the steel ball, the larger the axial load area of the slewing bearing, the heavier the self-weight, the higher the production cost, and the higher the procurement cost of the user, resulting in a large amount of capital and raw material waste.

In addition to the unreasonable matching of the two main parameters of JB2300-99, the design of the steel ball diameter series parameters is also insufficient.Its raceway center diameter D0 is selected according to the R20 priority number (the ratio is 1.12 in the geometric ratio), but the steel ball diameter series are: 20, 25, 30, 35, 40, 45, 50, 60, 75 ( JB230-84 is d0=30, 40, 45, 60, 75) an unscientific series.Digital games here certainly have no practical significance. The problem is that the rated static capacity of the slewing ring is proportional to D0·d0.For the time being, it is reasonable to ignore the match between D0 and d0. After calculating the values of all matched D0·d0 in JB2300-99, it is obviously a disorderly series, that is to say, the matching rated static capacity. The composition of the series is also a disorderly series, rather than a series of ratios, what effect does the user have?The number of tons of meters in the tower crane, the lifting weight of the car crane, and the number of tons of the excavator are selected in the first few series. The same is true for the speed of the step-variable machine tool. The concept of "speed loss" is used when designing the machine speed. , the rated static capacity composition ratio series can be used to minimize the "bearing capacity loss" when using the slewing bearing,The previous file of Example 30·710 is 40·800, the difference between the two COs is 50%, and the difference between 40.800 and the previous 40.900 CO is only 12.5%. When you first select 30·710, the safety factor is calculated. When the difference is 5%, the selection of 40·800 is obviously “loss of carrying capacity” of 45%. The “loss of carrying capacity” was only 7.5% when the primary safety 40.800 safety factor difference was 5% and the 40.900 was changed.

In the JJ36.1 standard, the main parameter matching and basic parameter design are relatively scientific and reasonable, and the overlapping design of the center diameter of some raceways (examples 1000·25 and 1000·32) minimizes the “loss of bearing capacity” and each has its own The basic parameters.Therefore, we suggest and hope that the main engine factory will use the single volleyball slewing bearing according to the JJ36.1-91 standard, which will reduce the procurement cost by 10%~30%, and the comprehensive economic and social benefits are very significant. We made such a proposal as a professional manufacturer of slewing bearings, and we are completely in the position of respecting science, because this will not reduce our sales revenue, and there is no other benefit.