You are here: Home » News » Slewing Drives » The advantage of slewing drive

The advantage of slewing drive

Compared with the traditional gearbox system, the slewing driver has many advantages and is mainly used for rotation under extreme load and conditions. The slewing drive usually uses a spur gear or worm gear to achieve rotation. The spur gear driver can achieve high speed and fast acceleration under rated torque to low torque load. on the other hand, the worm gear driver is slower, but  can amplify the input torque at a much higher rate than the typical spur gear system. therefore, worm gear drives are used in applications requiring high torque. 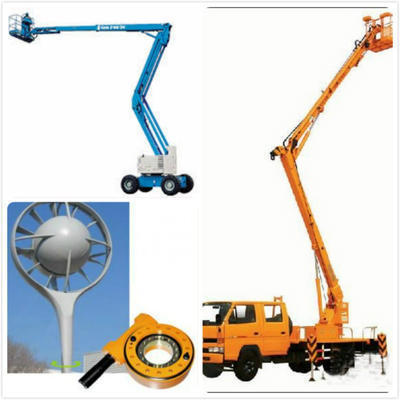 This article contains the following:

Compared with other gear box solutions, the slewing driver has compact structure and high power density, which is the preferred solution for space-saving applications such as robotics, automation, etc. design has a great influence on the bearing capacity and geometric dimensions. The single row raceway occupies the lower area of the performance curve, while the double row raceway and cross roller raceway have higher performance. Gear design is critical as this affects torque transfer capability as well as overall drive operation and rotation smoothness.

The best slewing drive system has a shell that closes the system and provides protection from environmental factors. therefore, slewing drives can be used in applications that are completely exposed to components without any damage or corrosion to internal parts. The sealing unit can also significantly reduce maintenance costs by limiting the loss of bearing lubrication to extend service life. turntable drives can be successfully designed to operate under extremely harsh conditions, such as salt spray conditions (ocean cranes), explosion-proof conditions (paint spray houses), mining, food and beverages, and cold and arctic conditions below zero.

Fully independent slewing drives also allow simple integration and installation into any system, plug and play. They can be easily bolted into place, attached to its power source, and are ready to perform. Compared with the old method of designing and assembling the rotary system from the parts (rotary ring, pinion, worm gear), and then adjusting the system for correct recoil and contact mode, this has obvious advantages. Once labor is taken into account, design, purchase and set time, the method is usually a cost-saving solution.

The slave drive provides a degree of customization to meet the needs of any application. they can be powered by one or two drive motors (twice the torque capacity). The drive motor can be electric or hydraulic to accommodate various power inputs or controls. Servo motor can be used for fine input and slewing drive output control. the encoder can be added to the rotating assembly of the slewing drive to provide real-time feedback on variables (e.g. angular velocity and position). Various seals, grease and coatings (paint, thick film passivation, galvanizing) are also provided to match corrosion protection to the application environment.

most slewing drives can have built-in security features and must be used in some applications where the drive must be "locked" or not rotated when the drive is not energized. this locking feature can be achieved either by leading to the so-called self-locking driven high transmission ratio (low efficiency) or by using additional brakes. Brake has two forms: permanent or spring hydraulic release. As the name implies, the permanent brake is always in the "on" state and will reduce system efficiency, resulting in self-locking of the drive. the spring-loaded hydraulic release brake controls the drive system more through the "on" brake in the "no power" state or power interruption. subsequently, the brake is released after electrification.