Slewing bearing, as a key component, connects the machine structural parts, transfers loads, and allows relative rotation between them. It is widely used in excavator, cranes, mining equipment, port hoist and military, scientific
research equipment, and so on.1 Especially in the wind industry, the single-row four contact-point slewing bearing is adopted as the yaw bearing2 to transfer axial (Fa), radial (Fr), and tilting moment (M) loads, and the rotational
movement between generators and tower is realized.

Given the importance of the slewing bearing on the mechanical structures and the complicated working condition, it may directly affect the normal operation of equipment once a failure happens and even causes huge economic losses and casualties. Because the damage mechanism and its development situation are not clear, the range and distribution of the detecting elements are selected mainly by experience rather than by theoretical guidance. It leads to weak signals, low signal-to-noise ratio, and poor accuracy of the fault identification. Therefore, the dynamic simulation of the slewing bearing with localized defect and the exploration of dynamic response caused by the defect have important practical guiding significance for monitoring system construction on the raceway damage of the slewing bearing. 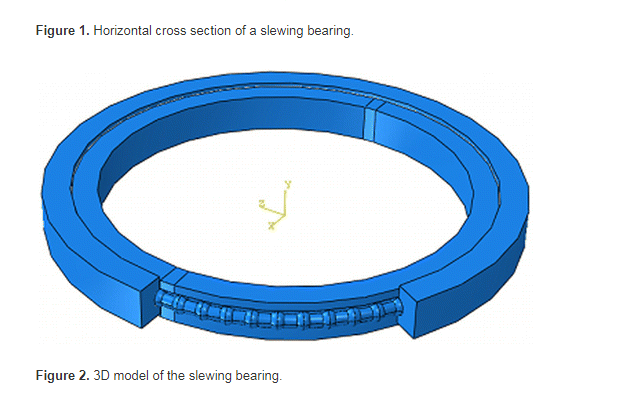 Flasker et al.5 carried out the numerical analysis on the raceway surface crack propagation of the slewing bearing and studied the crack propagation situation and raceway contact pressure distribution when the contact angle is different. Liu6 conducted the condition monitoring experiment of the slewing bearing and the grease has been analyzed to find out the content of iron. Finally, the wear status of the internal raceway and the service life are studied according to the results of the analysis. Caesarendra et al.7 performed the accelerating life test for slewing bearing to make it damage naturally, and the extracted vibration signals

are analyzed by the empirical mode decomposition (EMD) and ensemble empirical mode decomposition (EEMD) method, respectively, in order to obtain the accurate damage information of the slewing bearing. Žvokelj et al.8 collected the vibration and acoustic emission signals based on the slewing bearing condition monitoring experiments. The EEMD–multi-scale principal component analysis (MSPCA) method was applied in adaptive signal decomposition, and the fault feature

components were extracted to identify local defect of the slewing bearing.

These studies mostly focus on the load distribution, condition monitoring, and signal processing rather than the raceway damage mechanism, damage development, and its impact. But if the damage mechanism is unknown, the type and range of sensors is difficult to choose; therefore, the choosing of sensors is baseless in the previous researches. In addition, the finite element dynamic simulation method has been used in the bearing research and analysis9,10 more and more widely. These references indicate that this work mainly focuses on the static analysis of the slewing bearing rather than dynamic research of the bearings. However, all of the static researches of the bearings provide a lot of help for 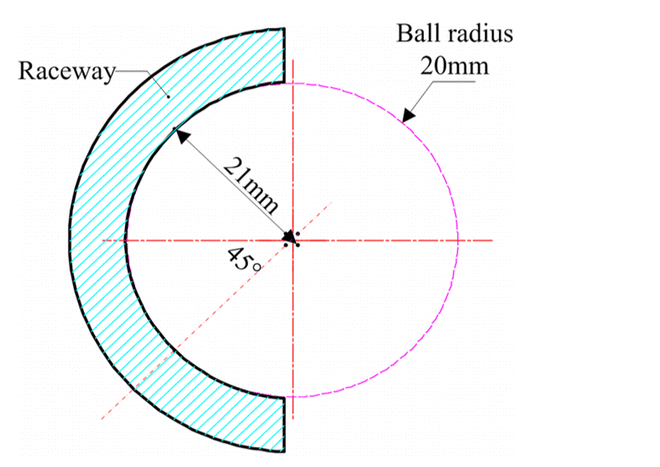 the next dynamic research of the bearings. For example, based on this work, Li et al.11 research the dynamic mechanical properties of single-row slewing bearing by the explicit dynamic algorithm. The distribution and variation of obtained Mises stress provide theoretical foundation for researching the bearing raceway damage.

Therefore, it is necessary to apply the dynamic simulation analysis method for slewing bearing study with the localized defects and explore the influence mechanism of the damage sizes. It is a new important research field and can provide powerful basis for online evaluation of the raceway damage.

According to the actual working condition, the external load, rotational speed, and other constraints were imposed to the models. The explicit dynamic finite element algorithm was adopted during the simulation analysis, and the influence mechanism of the damage size was obtained by analyzing the stress distribution on the surface of the slewing bearing raceway and the vibration acceleration response around the defect.